Queen Katharine Academy [QKA] joined The Thomas Deacon Educational Trust [TDET] as part of a Multi Academy Trust in 2017. A capital sum was carried over to the newly created Queen Katharine Academy to be used specifically for the benefit of those students at QKA who were in need. It was named: ‘The Enterprise Fund’. TDET and QKA Academy Committee members worked together to transfer the funds to a new and separate Charity Trust to be administered by seven trustees.

‘The prevention or relief of poverty of Queen Katharine students who are in need because of financial hardship or other disadvantage by providing grants, items and services to those in need and/or to charities or other organizations working to prevent or relieve poverty and/or financial hardship’.

The Trust exists to advance opportunities for all students through a rolling programme of bids/requests for funding from students currently studying at QKA who complete an application form. It is the collective responsibility of the seven Trust members to decide on successful student bids.

Katharine of Aragon and Peterborough 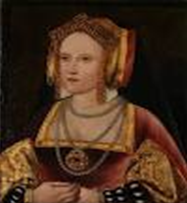 A contemporary painting of Katharine of Aragon

Henry and Katharine married in 1509 but the marriage was annulled in 1533. Katharine was banished to and died in Kimbolton Castle, now a private school close to Peterborough. After her death in 1536, and following a lavish ceremony, she was buried in Peterborough Cathedral.

Katharine’s heraldic symbol was the pomegranate.

The pomegranate is an ancient symbol for fertility [because of its many seeds] and was commonly associated with regeneration. Katharine chose the pomegranate as her heraldic symbol while a young princess in Spain. It is an apt heraldic symbol for Katharine’s life, especially: her suffering seven pregnancies in an attempt to give birth to a son [ironically only a daughter – Mary- survived into adulthood]; her deep faith and devotion to duty; her love of learning; her interest in promoting female education; her charity work. She was much admired throughout the kingdom for her dignity and thought for others. Many in the nation mourned her passing. 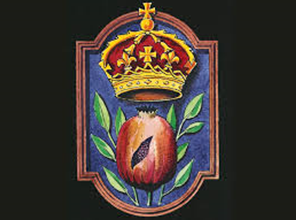 Our name and logo attempt to reflect some of the meaning implicit in Queen Katharine’s heraldic symbol of the pomegranate.

Continuing links between Katharine and Peterborough

Katharine’s links to Peterborough continue to be celebrated annually on her funeral date in the last week of January. Hundreds of children are encouraged to dress in Tudor costume and learn about life in early sixteenth century England. Flowers and pomegranates are laid upon her tomb.